The attention given to the design and installation of a facility ground system is a key element in the day-today reliability of the plant. A well-designed and -installed ground network is invisible to the engineering staff. A marginal ground system, however, will cause problems on a regular basis. Grounding schemes can range from simple to complex, but any system serves three primary purposes:

Most engineers view grounding mainly as a method to protect equipment from damage or malfunction.

However, the most important element is operator safety. The 120 or 208 Vac line current that powers most equipment can be dangerous — even deadly — if handled improperly. Grounding of equipment and structures provides protection against wiring errors or faults that could endanger human life.

Disturbance is lightning, power-system switching activities, or faults in the distribution network. Proper grounding is also a key element in preventing radio frequency interference in transmission or computer equipment. A facility with a poor ground system can experience RFI problems on a regular basis. Implementing an effective ground network is not an easy task. It requires planning, quality components, and skilled installers. It is not inexpensive. However, proper grounding is an investment that will pay dividends for the life of the facility.

Any ground system consists of two key elements: (1) the earth-to-grounding electrode interface outside the facility, and (2) the ac power and signal-wiring systems inside the facility.

A facility can be defined as something that is built, installed, or established to serve a particular purpose [1].

The Need for Grounding

Personnel safety and control of electrostatic discharge (ESD) by limiting potentials between all noncurrent-carrying metal parts of an electrical distribution system and the Earth • Fault isolation and equipment safety by providing a low-impedance fault return path to the power source to facilitate the operation of over current devices during a ground fault.

The IEEE definition makes an important distinction between ground and earth. Earth refers to mother earth, and ground

System grounding, which is also illustrated in Figure 1, is the process of intentionally connecting one of the current-carrying conductors of the electrical distribution system to ground [5]. The figure shows the neutral conductor intentionally connected to ground and the earth. This conductor is called the grounded conductor because it is intentionally grounded. The purpose of system grounding is overvoltage control and equipment safety through fault isolation. An ungrounded system is subject to serious over voltages under conditions such as intermittent ground faults, resonant conditions, and contact with higher voltage systems. Fault isolation is achieved by providing a low-impedance return path from the load back to the source, which will ensure operation of over current devices in the event of a ground fault. The system ground connection makes this possible by connecting the equipment grounding system to the low side of the voltage source. Methods of system grounding include solidly grounded, ungrounded, and impedance grounded.

Solidly grounded means that an intentional zero-impedance connection is made between a current- carrying conductor and ground. The single-phase (1) system shown in Figure 1, is solidly grounded. A solidly grounded, three-phase, four-wire, wye system is illustrated in Figure 2. The neutral is connected directly to ground with no impedance installed in the neutral circuit. The NEC permits this connection to be made at the service entrance only [6]. The advantages of a solidly grounded wye system include reduced magnitude of transient over voltages, improved fault protection, and faster location of ground faults. There is one disadvantage of the solidly grounded wye system. For low-level arcing ground faults, the application of sensitive, properly coordinated, ground-fault protection (GFP) devices is necessary to prevent equipment damage from arcing ground faults. The NEC requires arcing ground-fault protection at 480 Y/277 V services, and a maximum sensitivity limit of 1200 A is permitted. Severe damage is less frequent at the lower voltage 208 V systems, where the arc may be self-extinguishing 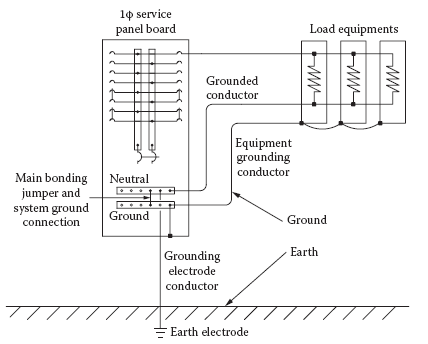